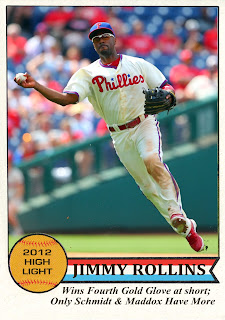 In late October, Jimmy Rollins nabbed his fourth Gold Glove award for his dazzling defense at shortstop.  It was his first Gold Glove since he won over three consecutive years in 2007, 2008 and 2009.  Only Mike Schmidt (10) and Garry Maddox (8) have won more Gold Gloves in franchise history.

Carlos Ruiz, who was a finalist for the award at catcher, lost out to Cardinals catcher Yadier Molina.

Here's a look back at a few other Chachi cards celebrating past Phillies Gold Glove winners: