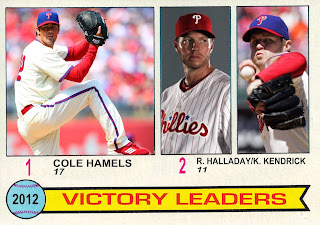 There are a few things wrong with this card.

Nothing against Kyle Kendrick, but when your staff boasts Cole Hamels, Roy Halladay and Cliff Lee, there shouldn't be room for any other starting pitcher on a team leaders card.  Halladay and Kendrick both started 25 games during the 2012 season and it's still hard for me to wrap my brain around the fact that Kendrick's ERA (3.90) is more than a half a run less than Halladay's (4.49).  I thought it was appropriate that Halladay looks ticked off to be sharing box space with Kendrick on this card.

Hamels had a fantastic year, winning a career high 17 games and signing a six-year contract extension over the summer.

Lee started 30 games during the season, and it was very well documented that he didn't notch his first win until July 4th.  He finished with just 6 wins on the very disappointing season.  To remember happier times, please flash back to the 2011 Chachi Victory Leaders card.

Here are the rest of the team's leaders in wins for 2012:

Look on the bright side. At least you didn't have to make that card for the 2012 Red Sox.

Who is Felix Doubront?