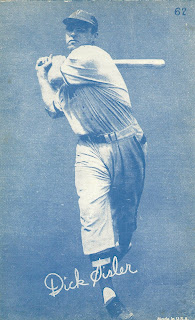 My Dad's two favorite Phillies were Del Ennis and Dick Sisler, and I'm slowly adding cards of both players to my collection.

Not to be confused with the regular Exhibits cards released between 1921 and 1966, there was a set of 64 Exhibits cards released in 1953 exclusively in Canada.  Appropriately enough, the set is known as the 1953 Canadian Exhibits.  As far as I know, this Sisler card was the only Phillie included in the set and it shares the blue tint found on cards 33 through 64.  The first 32 cards in the set can be found with either a green or red tint.  And now you know.
Posted by Jim at 8:50 AM

Email ThisBlogThis!Share to TwitterShare to FacebookShare to Pinterest
Labels: 1953, Sisler