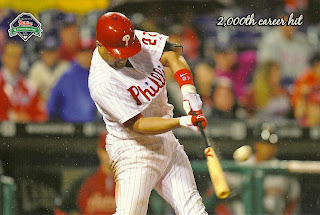 As we preparing our basement for proper hunkering down during Hurricane Sandy, I saw the news that the Phillies had declined their 2013 options on reliever Jose Contreras and first baseman Ty Wigginton. A few hours later, still with electricity, the announcement came that Placido Polanco was also now an ex-Phillie.  None of the three declined options comes as a shock.

Contreras signed with the Phils prior to the 2010 season and enjoyed a very successful year out of the bullpen.  He went 6-4 with a 3.34 ERA and four saves that year.  Unfortunately, arm problems limited Contreras to just 17 games in 2011 and another 17 games in 2012.  He'll be 41 in December so this could be the end of the line for the 10-year Major League veteran.

Polanco is just one year removed from his All-Star and Gold Glove season of 2011.  He started slowing down in the second half of 2011 and missed time with back problems and a sports hernia.  Back injuries slowed down Polanco significantly in 2012, as he made it into only 90 games.  It's unknown if he'll be able to continue his baseball career and it's a real possibility that he could be done after 15 seasons.  In his seven total years with the Phils (2002-2005 and 2010 to 2012), Polanco hit .289 in 688 games.

The card featured at the top of this post was included in the 9-card set given to fans attending Fan Appreciation Day at the ballpark.  It pays tribute to Polanco's 2,000th career hit which came back on May 14th.