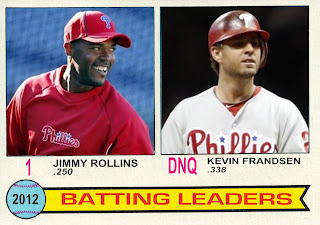 I'm sure if I was more savvy with the tools available on Baseball Reference, I could figure out the following question:  When was the last time, prior to this past season, when the Phillies had only player with enough at-bats to qualify for the batting title?

If you throw qualifying plate appearances out the window, here are the Phillies position players who hit over .300 last season:

And if you use a qualifying mark of 3.1 plate appearances per team games played, both Ruiz and Pierre would qualify for the title.

Finally, and amazingly, we have to go back to 1888 and Phillies Room favorite Sid Farrar to find the last time someone led the team with an average as low as Rollins' .250:

Under Rule 10.22(a), if the player with the highest average in a league fails to meet the minimum plate-appearance requirement, the remaining at-bats until qualification (e.g., 5 ABs, if the player finished the season with 497 plate appearances) are hypothetically considered hitless at-bats; if his recalculated batting average still tops the league, he is awarded the title. By this standard, Ruiz actually led the Phillies in hitting. If you add the necessary 81 hitless at bats to get him up to 502, his adjusted batting average is .267, which is still higher than Rollins. Therefore, he can be credited with winning the Phillies batting title this year.

After I finished my comment, I realized that I hadn't run the math yet on Pierre to see if maybe he might win, needing only 63 hitless at bats to reach 502 plate appearances. However, after running the numbers, while his adjusted average of .265 is higher than Rollins, Ruiz still can be considered the team leader.