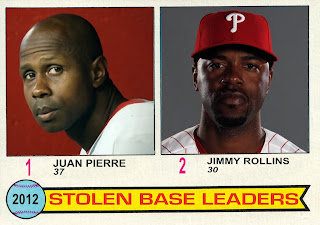 This post is scheduled to publish on Tuesday morning.  I'm hoping we still have electricity by then as we're getting battered by Hurricane Sandy.  Stay safe everyone!

As expected, the Phillies exercised their option on catcher Carlos Ruiz' contract yesterday, locking him up for the 2013 season at $5 million.  It's expected that the Phils will decline their options on reliever Jose Contreras and third baseman Placido Polanco, who both missed significant time this past season due to injuries.  Ty Wigginton could also find himself without a home as the Phils could decline his option following a disappointing 2012 campaign.*

137 players became free agents immediately following the end of the craptastic 2012 World Series, with Juan Pierre and Brian Schneider both on that list of initial filings.  Pierre had a great season, and I would think the Phillies would want to bring him back to help round out the bench in 2013.  In 130 games, Pierre batted .307 and led the team with 37 stolen bases.

To date, Pierre has received Phillies cards in the Allen & Ginter's set (both a base card and an insert in the What's in a Name set), the Topps Series 2 set and the two Phillies team issued postcard sets.  Per the checklist I saw for the soon to be shipped Topps Heritage High Numbers boxed set, he's the lone Phillie appearing in that set.

Schneider was limited to just 34 games in 2012 and he hit just .225.  Erik Kratz is his heir apparent to back-up Ruiz in 2013.  Despite his three seasons with the club, Schneider's sole standard size Phillies card is his relic card from the 2010 Topps 206 release.

*As soon as I had hit Publish on Monday afternoon, the announcement came that Wigginton's and Contreras' options were declined.  I'll give them a separate departure post.  Later in the evening, the Phillies announced they had also declined Polanco's option.
Posted by Jim at 8:00 AM

Does anyone care that Schneid is gone?

I'm sure Erik Kratz is pretty happy about it.

And Tommy Joseph down on the farm.

Schneider was a decent back-up for a time. He'll be remembered like Steve Lake, Todd Pratt, etc.

(I guess I meant, is anyone bothered by Schneider's departure)