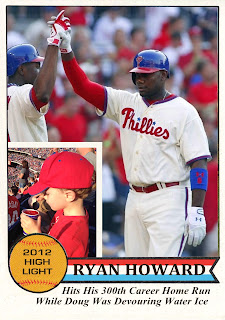 One Sentence Summary:  Roy Halladay (perhaps hurt?) didn't survive the second inning as the Phillies lost to the Braves, 8-2.

What It Means:  The push for a play-off spot just got a little more difficult.  The Phillies fell back to four games behind the Cardinals for the second Wild Card with ten games to play.  The Dodgers and Brewers also stand between the Phils and the Cardinals.

What Went Wrong:  Halladay was off from the start.  He allowed seven runs on five hits and three walks in 1 2/3 innings, and it was just the second time in his career that he failed to make it through two innings.

Featured Card/Field Report:  Doug and I attended this game together, and while the ballgame was a bust, the father/son outing was a success.  Doug did his best bottomless pit impersonation, downing a cheeseburger, some fries, a huge cherry water ice and most of a box of popcorn.

While Doug was working on his water ice, Ryan Howard hit his 300th career home run on a blast to center off Braves pitcher Mike Minor in the fourth.  Howard joins Mike Schmidt as the only two Phillies to have hit 300 home runs with the franchise.

So we witnessed some history yesterday.  Or more accurately, I witnessed history since Doug was too focused on his delicious cherry water ice.  I'll tell him about it one day.

I dropped to an ugly 4-8 mark in Phillies games I've attended this year.  I plan to make it to one more game this year before calling it a season.
Posted by Jim at 8:00 AM

they only can probably lose 1 more game if they want a chance....

also, i'm jealous of getting to eat water ice. everytime i mention that out here, i get blank stares.

That's a lot of food!

Great card! Reminds me of the "He Thinks This Happens Every Year" card from the 2008 NL East clincher!

I was there Friday night, so I saw MR #299 and a win. I guess all in all I'd rather see the win and miss the milestone HR. Well, at least at the time. Years from now, you have a much better story to tell, having seen #300.

Coincidentally, the Phils record in games I've attended is also 4-8. I saw them win the opener in Pittsburgh, then lose 8 in a row, and now win the last three I've attended. I'm streaky like that.

I'm going to the home finale--and it WILL be the home finale now, although my playoff tickets will likely arrive in the mail after that game, since the Phillies won;t want to give up that $25 printing/mailing fee. So we'll see whether they can pull it to within 3 games of .500 for me.

My plans for tomorrow night fell through, so I have most likely witnessed my last Phillies game of 2012. Probably for the best.