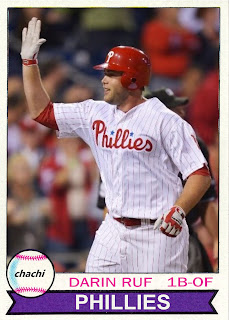 One Sentence Summary:  Darin Ruf hit a home run in his first Major League start as the Phillies defeated the Nationals, 6-3.

What It Means:  The Phillies did their part to postpone the Nationals' inevitable pennant clinching celebration.

What Went Right:  Ruf started the scoring with his solo home run in the second.  The Phils added four more runs in the third on Ryan Howard's RBI-single and a three-run home run from Carlos Ruiz.  Chooch is padding his career highs in home runs and RBIs as he now sits with 16 home runs and 65 RBIs in his career year.

Cole Hamels had a short outing, but he still earned his 16th win of the season.  A quartet of Phillies relievers held the Nationals scoreless before closer Jonathan Papelbon locked down the win and his 37th save.

Featured Card:  Ruf gets his well-deserved Chachi card, most likely becoming the final player featured in the 2012 Chachi set.  With his shot last night, Ruf has now hit 39 total home runs on the season - his first 38 coming in his record-setting year with Double-A Reading.  Here's the back of his card: