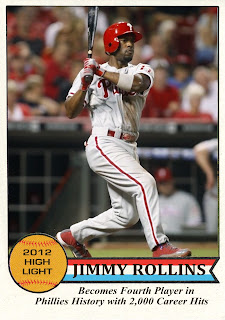 One Sentence Summary:  The Phillies offense was held in check and a blown umpire's call cost them a run, as the Reds won, 2-1.

What It Means:  We're one day closer to the offseason.

What Went Wrong:  The Phils managed just four hits all night, with their lone run coming when Domonic Brown walked with the bases loaded in the fourth.  Nate Schierholtz followed with a sinking liner to center that was ruled a catch, and an eventual double play, but was shown on replays to clearly be a trapped ball.  The Phils would have scored their second run of the game if not for the botched call.

Kyle Kendrick's only blemish was a two-run home run to Jay Bruce in the sixth.

Featured Cards:  With a chop double down the first base line in the fifth, Jimmy Rollins collected his 2,000th career hit.  He became the fourth Phillie to reach that milestone, following Ed Delahanty (2,207), Richie Ashburn (2,217) and Mike Schmidt (2,234).  That's elite company for the shortstop, who collected his first hit with a triple off the Marlins' Chuck Smith back on September 17, 2000.  Following the game, Rollins admitted that the next milestone he's shooting for is 2,192 hits, which would give him one more than his former manager, Larry Bowa.

"Rollins admitted that the next milestone he's shooting for is 2,192 hits, which would give him one more than his former manager, Larry Bowa."

His real goal should be to get his OBP up about 30 points--that would help the Phillies win!

1. Take a pitch after the batter before you has walked on four pitches.

2. Stop popping up and start hitting down on the ball for more line-drive singles/doubles/triples.