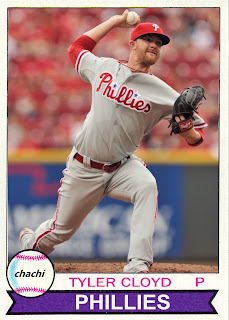 One Sentence Summary:  In his second big league start, Tyler Cloyd mastered the Reds, leading the Phillies to a 4-2 Labor Day victory.

What It Means:  True, the Phillies have been hot of late, but I won't be convinced they have even a remote shot for the second Wild Card until they at least reach .500.  If they win their next five in a row, I'll listen to the Wild Card chatter.

What Went Right:  It was a game of firsts.  Cloyd earned his first win by allowing just one run on four hits over seven innings of work.  He out-duelled Cy Young candidate Johnny Cueto, who was going for his 18th win of the season.  Justin De Fratus pitched a scoreless eighth in his 2012 debut and Phillippe Aumont recorded the final three outs in the ninth for his first Major League save.

Featured Card:  It's got to be Cloyd.  In lieu of showing another of Cloyd's minor league cards, here's his 2012 Chachi card which is also his very first (unofficial and pretend) Phillies baseball card.  Here's the back of the card: