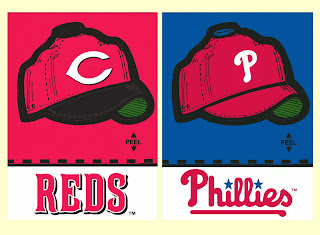 At the Ballpark:  Tonight is the latest Dollar Dog Night, and if you plan on partaking, here's a little dog-related advice.  Tuesday night is Hunter Pence bobble-head night.  Awk-ward.  And Wednesday night is 1990s Retro Night with both the Phillies and Reds wearing 1990-style uniforms.

1979 Topps Flashback:  Up until a few weeks ago, I would have sworn Pete Rose had one Phillies card from 1979, and one card only.  Perusing through Checkoutmycards.com recently, I discovered Rose also had a 1979 Hostess issue featuring a bad airbrush job giving him two Phillies cards from 1979.  Of course I added the Hostess card to my collection, and I'll be sure to feature it in a future post.

Rose joined the Phillies organization on December 5, 1978, when he signed a four year, $3.225 million contract with the club.  At the time, he was the highest paid player in the Majors.  It turned out to be money well spent as Rose helped lead the Phillies to their first World Championship in 1980.
Posted by Jim at 6:05 PM

Dang--I went last night and hadn't read your dollar dog advice. And I bought hot dogs for my Mom, Dad and one of my daughters that tasted like they were prepared at the Vet! I feel like a bad son/father.

But I now know for next time (September 11 versus Miami), so thanks for the reminder.

P.S. No photocard set #2.1 yet. One of the vendors said he expected it in September but he wasn't sure. And he pointed out that they'd probably pull Victorino and Pence from it at that time, so get it now if you don't have the second set.

By the way, what is the difference between Hostess cards and Twinkies cards? (Besides that presumably Hostess cards were on Hostess products other than Twinkies, of course.) I have seen references to both, and I probably have some of each in my small pile of such cards, but I have no idea which is which.

Thanks for the update on photo card set 2.1 and good luck next time on Dollar Dog night!

Twinkies cards are also the ones which often have stains on them... they were packaged inside the cellophane with two Twinkies (like you'd get at a convenience store), rather than on a box.

When someone mentions Pete Rose's contract with the Phillies, I can't help but think of Chico Esquela's report on SNL's Weekend Update. "Base-a-ball been berra berra good to Pete Rose. 3.2 million dollars. Charlie Hustle? You bet!"

Thanks, both of you, for the info on the Twinkies/Hostess cards. Are there any differences in the pictures between the sets (to your knowledge)?

I don't think there are any differences between the photos.