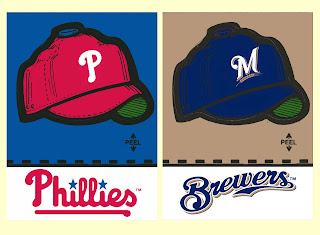 At the Ballpark:  Saturday is "Autograph Saturday for Kids" at Miller Park, when "Brewers players and coaches will autograph photo cards for kids 14 and under."  Pretty cool promotion.

1979 Topps Flashback:  This is the last meeting between these two teams in 2012, so here are the last three Brewers cards within the 1979 Topps set with Phillies connections.

Don Money was Hisle's teammate first in Philly and then with the Brewers.  Originally a shortstop, the Phils moved him to third base to make room for rookie Larry Bowa in 1970.  He was dealt to the Brewers following the 1972 season to make room for rookie Mike Schmidt.  With the Brewers between  1973 and 1983, Money was named to four All-Star teams and he earned the nickname "Brooks" for his fine defense.  Over his 16-year career, he tallied 176 home runs.

Sixto Lezcano began his 12-year career playing in parts of seven seasons with the Brewers.  He was acquired by the Phillies from the Padres in August 1983 and he hit .308 in a losing effort for the Phillies against the Dodgers in that year's N.L.C.S.  He was the team's primary right fielder in 1984, hitting .277 with 14 home runs and 40 RBIs.
Posted by Jim at 7:10 PM

One of these days, I'd like to see if I can determine (on average) what percentage of Major League players in a given Topps set are either playing for the Phillies, have played with the Phillies or will eventually play with the Phillies.

That would be a cool project.

To this day, whenever I flip through one of my Topps sets, I always tally up how many ex or former or current Phillies are on any given page.