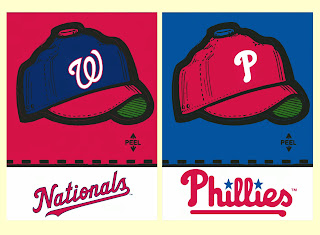 At the Ballpark:  On Sunday, all kids will receive a Jimmy Rollins back to school cooler bag.

1979 Topps Flashback:  Before looking up his career stats for this post, I had no idea that Hall of Famer Tony Perez spent three whole seasons manning first base for the Expos.  Amazingly enough his game total with the Expos (434 games) is second only to his total games played with his primary team, the Reds (1,948 games).  Perez came to the Phillies in January 1983 and made up part of the Wheeze Kids that won the National League pennant.  In 91 games, as Pete Rose's back-up at first and right-handed bat off the bench, Perez hit .241.

Current bench coach Pete Mackanin spent the majority of his Major League career with the Expos, playing in 299 games with Montreal between 1975 and 1977.  In early September 1978, the Phils selected him off waivers.  He appeared in 5 games with the Phillies in 1978 (2 for 8 at the plate) and 13 games in 1979 (1 for 10).  He was traded to the Twins following the 1979 season.  He received two Phillies cards for his 18 games in burgundy - this Burger King card and a hard to find card within the 1979 Phillies Postcards set.
Posted by Jim at 6:05 PM

Perez was the first member of the "Big Red Machine" to depart, as they wanted to make room for Dan Driessen.