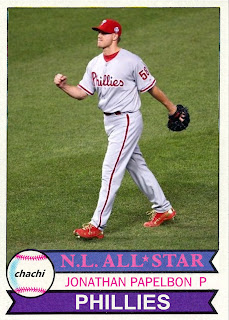 One Sentence Summary:  Kyle Kendrick had another impressive outing and Kevin Frandsen added a four-hit performance as the Phillies won against the Mets, 3-2.

What It Means:  The Phils salvaged one game from the three game series and regained sole possession of third place in the East.

The win was somewhat overshadowed by the benching of Jimmy Rollins, who failed to run out a pop-up in the sixth inning.  It marked the second time this year that Rollins was called out by manager Charlie Manuel for not hustling.

What Went Right:  Kendrick allowed two solo home runs in the first two innings and then settled in on the way to his eighth win of the season.  He allowed just four more hits in the third through the eighth innings.  Jonathan Papelbon pitched a scoreless ninth for his 30th save of the season.

Frandsen went 4 for 5, raising his average to .355 and John Mayberry, Jr. added three hits for the offense.

Featured Cards:  Kendrick was the pitching star of this game, but I've been waiting for a decent excuse to feature Papelbon's All-Star card from this year's Chachi set.  With his save yesterday, Papelbon became the 10th Phillies pitcher to record a 30-save season.

I also wanted to honor Frandsen for his impressive performance.  Manuel has awarded Frandsen the starting third baseman's job for the duration of the season as Placido Polanco continues to deal with a bad back.  With Tyler Cloyd's recent promotion, here's an updated listing of the 2012 Phillies players without a Phillies baseball card to date, and Frandsen tops the list.  Phillies Team Issue 2.1, the Topps Update set or a late-year Bowman issue are these players' last hopes for a 2012 Phillies card: