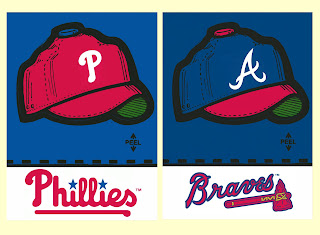 At the Ballpark:  The first 10,000 fans through the turnstiles tonight at Turner Field will receive a Tim Hudson home alternate t-shirt.  On Sunday afternoon, kids will be allowed to run the bases following the completion of the crushing series sweep by the Phillies.

1979 Topps Flashback:  Larry McWilliams made a brief 40-game pitstop in Philadelphia in 1989 towards the tail-end of his 13-year career.  As a starter and a reliever, McWilliams posted a 2-11 record with the Phils a 4.10 ERA before being shipped to the Royals in early September for minor league catcher Jeff Hulse.  His time with the Phillies has been memorialized with three baseball cards, all from 1989 issues - Bowman, Topps Traded and the team-issued Tastykake set.

McWilliams spent his first six seasons with the Braves, and he's credited with helping to halt Pete Rose's 44-game hit streak in 1978.  On August 1, 1978, he was the starting pitcher in the game that saw the end to the streak and his diving stop of a ball hit by Rose up the middle in the 2nd was the closest Rose came to advancing his streak that day.
Posted by Jim at 6:35 PM