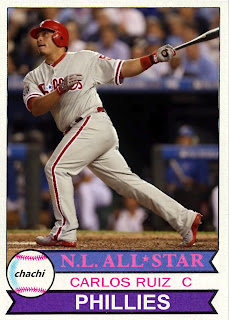 One Sentence Summary:  The N.L. All-Stars jumped on Justin Verlander early as 11 pitchers combined to shut-out the A.L. All-Stars in the Mid-Summer Classic.

What It Means:  I love the All-Star Game.  It really is like Christmas in July for me, and it was nice to be rooting for a team with a large lead and a decent chance to win for a change.  The N.L. won their third consecutive All-Star game, winning World Series home field advantage for the Phillies N.L. pennant winners.

What Went Right:  The N.L. offense was paced by a three-run triple in the first from Pablo Sandoval and a two-run home run from Melky Cabrera in the fourth.

Carlos Ruiz entered the game in the bottom of the sixth, assigned the task of catching knuckle-baller R.A. Dickey.  Ruiz did just fine behind the plate, catching the final four frames.  At the plate, Chooch flew out to left fielder Mike Trout* in the seventh.

Cole Hamels pitched a perfect seventh, retiring Billy Butler, Matt Weiters and Adam Jones in order.  Jonathan Papelbon was called on to record the final out of the game and he retired Wieters on a fly ball to right.  It was nice to see Ruiz and Papelbon congratulating each other after the win - a sight I hope to see more frequently in the second half.

Featured Card:  It's an annual tradition at The Phillies Room to produce Chachi All-Star cards for the chosen Phillies.  This was Chooch's first All-Star game selection, and he receives the honors for this post given his status as the clear MVP of the team's first half.

*Special congratulations to Mike Trout, who is from my hometown of Millville, NJ.  I love that our entire town has rallied around the young All-Star and all the praise heaped on him by Fox during the All-Star Game telecast is extremely well-deserved.
Posted by Jim at 10:00 PM