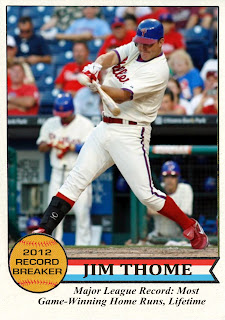 One Sentence Summary:  Jim Thome hit a dramatic, 9th inning game-winning home run, giving the Phillies a 7-6 victory and pulling them out of the basement in the N.L. East.

What It Means:  Momentum starter?

What Went Right:  Last Saturday was our first day down at the shore, and I had the pleasure of watching the end of this game on TV.  Fortunately, I missed the part where Jonathan Papelbon blew the save in the top of the ninth, but I did correctly predict that Thome was going to win the thing on a walk-off.

Juan Pierre contributed an improbable three-run home run in the fourth, which came after Jimmy Rollins' two-run home run in the third.  It was just Pierre's fifth home run since 2006.  Papelbon came away with the win, but the pitcher contributing the most to the victory was Raul Valdes.  Valdes pitched two scoreless innings of relief, striking out four, after starter Kyle Kendrick exited after just four innings.

Featured Card:  I thought Thome's feat deserved the first Chachi Record Breaker/Highlight card of the year.  This card was modeled off the Record Breaker subset featured within the original 1979 Topps set. Thome’s home run was the 609th of his career, tying him for seventh on the all-time list with Sammy Sosa.  It was also his 13th game-winning home run, the most in Major League history.  Finally, the victory gave Charlie Manuel his 900th win overall as a manager.
Posted by Jim at 8:00 AM