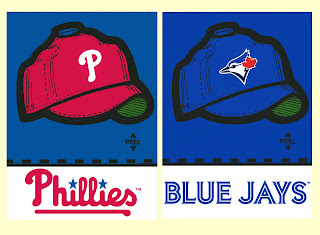 At the Ballpark:  For Father's Day on Sunday, the first 20,000 fans will receive a Blue Jays replica batting helmet.  (I wish the Phillies would bring back batting helmet day.)

Warren Brusstar has absolutely no connection whatsoever to the Blue Jays, as far as I'm aware.  But I didn't have anywhere else to put him, so here he is.  Brusstar was a righty reliever who made his debut with the Phillies in May 1977.  He pitched in parts of six seasons with the Phils before being sold to the White Sox in August 1982.  Brusstar was the winning pitcher in Game 4 of the 1980 N.L.C.S., which was the first of two extra inning games won by the Phillies, advancing them to the World Series.

Tom Underwood enjoyed an 11-year career, pitching with the Phillies during his first four seasons.  He hit his career high in wins (14) and shutouts (2) in 1975.  35 years ago today, in 1977, Underwood was shipped to the Cardinals with Rick Bosetti and Dane Iorg for Bake McBride and Steve Waterbury.  He finished out the '77 season with the Cardinals and was traded during the offseason to the Blue Jays.  Underwood was coming off a 6-14 season with the Jays in 1978 when this gloriously lopsided card began appearing in packs of 1979 Topps cards.
Posted by Jim at 6:07 PM

Jim, I was afraid you were going to go Joe Carter on us with your opposing team cards

Awesome blog man, some of my favorite players groing up were phils. I actually appreciate Hamel's drilling harper.

THE GREATEST PHILLIE EVER. BAKE McBRIDE!!

I would never feature a card of He Who Must Not Be Named.

Thanks Marshal! Shake and Bake!