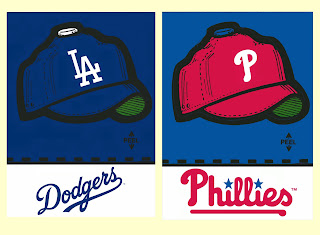 At the Ballpark:  If there's one give-away I wish I could score this season, it's tonight's as all fans will receive a Cliff Lee bobble head.  Off to eBay I go!

Interestingly enough, the stats on the Phillies website have Ruiz not qualifying with enough plate appearances to lead the team in batting average.  It lists Placido Polanco (.289 in 180 at-bats) as the team leader.

1979 Topps Flashback:  Today's flashback features another duo traded for one another.  On December 20, 1976, the Phillies shipped catcher Johnny Oates and a player to be named later (Quency Hill) to the Dodgers for infielder Ted Sizemore.

Oates served as Bob Boone's primary back-up behind the plate during the 1975 season, and he was the team's third-string catcher (behind Tim McCarver) during the 1976 season.  His playing time in 1976 was limited due to a broken collar bone suffered during the first game of the season in a home plate collision with Dave Parker.

He played in a total of 127 games with the Phillies, hitting .277 with one home run.  He continued his back-up role with the Dodgers from 1977 through 1979, appearing in both the 1977 and 1978 World Series against the Yankees.  Oates found greater success as a manager, being named the 1996 American League Manager of the Year after guiding the Orioles to a division title.  Sadly, Oates passed away on Christmas Eve 2004 after bravely battling brain cancer.

Sizemore started his 12-year career with the Dodgers in 1969, winning the National League Rookie of the Year award.  Following the 1970 season, he was traded to the Cardinals (for Dick Allen) where he spent five seasons before coming back to the Dodgers for the 1976 season.  He served as the Phillies primary second baseman in 1977 and 1978 before getting shipped to the Cubs as part of the blockbuster deal that netted Manny Trillo for the Phils.  In his two years with the club, Sizemore hit .256 in 260 games.  The highlight of his time in Philly is perhaps his .385 average in the 1978 N.L.C.S. against the Dodgers.
Posted by Jim at 6:05 PM

As I recall, Oates had won the #1 catching job that spring (away from Boone). Then his injury occurred on opening day, and Boone retained the starting job into the 1980s.