One Sentence Summary:  The offense couldn't string together enough consecutive hits to support Roy Halladay's strong outing as the Phillies lost to the lowly Padres, 2-1.

What It Means:  Halladay was 3-0 after his first three starts this season, and he's gone 0-2 with three no decisions in his five starts since.  Halladay pitched seven strong innings, scattering seven hits and striking out ten.  The Phils will try to win the series this afternoon.

What Went Wrong:  The Phils left 12 runners on base and were collectively 1 for 10 with runners in scoring position.  The offense's futility was at its low point when the Phillies had runners at second in third in the seventh with no outs, yet they couldn't manage to push a run across the plate.

Featured Card:  Another game, another featured card that has nothing to do with the actual game.  Such is the case when the Phillies don't give me any reason to post a card of anyone on their current 25-man roster.  At least the Phillies have good company in the "What the crap is going on this year" department.  Case in point, the Boston Red Sox are now 14-19 and in the cellar in the A.L. East. 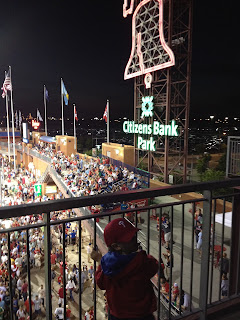 Spring Training stand-out Scott Podsednik was recently traded to the Sox for cash considerations, ending his hopes of playing for the Phillies.  Podsednik signed a minor league deal with the Phils last May, and in 36 games with the Lehigh Valley IronPigs he hit just .220.  The Phillies jumped the gun by including Podsednik in their team issued postcard set, but the outfielder merits only a Chachi Almost card from The Phillies Room.  Maybe Podsednik will help cure some of the Sox' woes.

Field Report:  I attended this game with my five-year-old son, Doug, in what was his first ever Phillies night game.  Once he got over the initial shock that he'd be up (and out) way past his bedtime, he seemed to thoroughly enjoy himself.  I don't think it mattered too much that there was a baseball game being played as his favorite things from the evening were the Phanatic's performances, the nachos we shared after the first inning and the cherry Italian water ice he scarfed down between the fifth and sixth innings.

He did ask repeatedly if the Phillies were winning, and he at least seemed a little disappointed when I answered that no, they weren't winning yet.  It was nothing a little cherry Italian water ice couldn't cure however.  The Phillies are now 1-3 in games I've attended this year.
Posted by Jim at 8:00 AM

Glad you had a great time at the game. Hopefully you didn't pay for it this morning.

The Podsednik move scares me. Why would the Sox need an outfielder if they're going to get two all-star outfielders off the DL...unless...

I read somewhere (Olney?) that the Phillies and Red Sox may actually be able to help each other out. He had suggested maybe the teams swing a deal involving Youkilis and Joe Blanton. It would give the Phils a bat and someone to play third and/or first until Ryan Howard comes back. Blanton could bolster the Sox rotation.

It appears as if both teams just need a good swift kick.

That is a really cool picture from the game. Fathers Sons and a Giant Liverty Bell.

Thanks Phungo. I'm a lucky man.