One Sentence Summary:  Matt Garza stymied the Phillies offense (which isn't hard to do these days) as the Cubs won, 5-1.

What Went Wrong:  Jimmy Rollins hit a bloop single to lead off the first, and then the Phillies were held hitless until Hunter Pence's infield single in the ninth.  Those were the team's only two hits all afternoon.

Featured Card/Field Report:  My entire little family attended the game yesterday afternoon and it was my two-year-old Ben's first Phillies game.  Both Doug (age five) and Ben were understandably underwhelmed by the game.  The highlight for both boys was getting to sing happy birthday to the Phanatic (along with the rest of the fans in attendance) during a pre-game birthday ceremony.  I'm hoping the next game I take the boys to is a little more exciting, otherwise they're going to start to wonder why I'm such a baseball fanatic.  At least the cherry water ice and popcorn were delicious!

(The Phils are now 1-2 in games I've attended this year.) 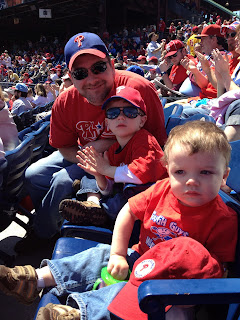 Email ThisBlogThis!Share to TwitterShare to FacebookShare to Pinterest
Labels: 2012, Phanatic

I'm guessing that any game with the boys is an exciting game. I know that ice cream in a hat is always a favorite.

We have a Sunday plan, but we had to sell the tickets for this game because all 3 kids had sports events. I have yet to take them to a Phanatic birthday, even though every year when the promo schedule comes out, that's the one they pick as their first choice.

We seem to end up with a lot of (lame) W.B. Mason trucks.

We used to have the Sunday plan, but it just got too tough to get to the games. I miss all the great give-aways though. (Except the W.B. Mason trucks.)