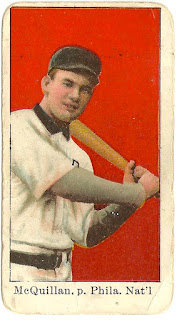 Reader John recently alerted me to a bunch of auctions on eBay from a seller "selling an obsessive fan's gigantic PHILADELPHIA PHILLIES card and memorabilia collection dating from 1990-1990."  Thanks to the head's up, I've added a nice assortment of older Phillies cards to my collection on the cheap, including the beauty displayed here.

The corners are rounded, and there's a slight crease in the lower right corner, but it makes me incredibly happy to add a 100-year-old+ card to my collection for the price of a blaster of 2012 Topps Heritage.

The Set
In The American Card Catalog, Jefferson Burdick assigned the E90-1 designation to this set, with the "E" indicating the cards were sold with caramel products.  The American Caramel Co. of Philadelphia included these cards with sticks of caramel candy between 1909 and 1911.  The backs of the cards indicate there are "100 Subjects" within the baseball series, but the Beckett database shows 120, while my 2001 Standard Catalog of Baseball Cards shows 118 in the set.

The Player
George Watt McQuillan was born on May 1, 1885 in Brooklyn and he made his Major League debut with the Phillies on May 8, 1907 at the age of 22.  He's best remembered for starting his career by pitching 25 scoreless innings - a record that stood until it was broken by the A's Brad Ziegler in 2008.  McQuillan's first full season with the Phillies, 1908, was his best season by far when the righty went 23-17 with a 1.53 ERA over 48 games.  He also struck out a career high 114 that season and his '08 stats placed him as the second best pitcher of the year behind Christy Mathewson.  (Before I noticed the little "p" on the bottom of McQuillian's card, I assumed he had been a slugger given his pose with the bat.)

McQuillan pitched with the Phils between 1907 and 1910, earning the nickname "The Giant Killer" for his dominance over the New York Giants.  Following the 1910 season, McQuillan was part of a blockbuster eight-player trade with the Reds.  He spent three seasons with the Reds and Pirates before coming back to the Phillies for the 1915 and 1916 seasons.  In 1915, he was a part of the franchise's first National League championship although he did not pitch in the World Series against the Red Sox.  Health problems curtailed McQuillan's baseball career and there's a very informative biography at the SABR Baseball Biography Project that tells of McQuillan's sordid fall from grace. 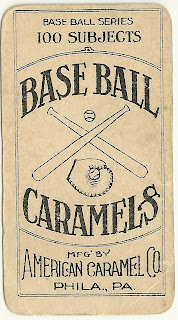 The Cards
There are seven Phillies cards featured within the E90-1 set:

Email ThisBlogThis!Share to TwitterShare to FacebookShare to Pinterest
Labels: 1909, McQuillan