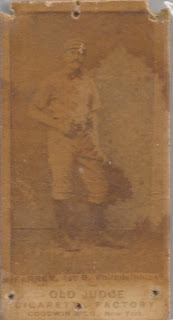 If I may say so myself, it's quite obvious that I have a talent for appreciating and collecting Phillies baseball cards.  Among my many hidden talents, however, is the ability to deftly prepare an individual income tax return.  My Mom's income taxes were a little complicated this year, and to show her appreciation for my hard work in preparing her tax return, she simply tracked down a 125-year-old baseball card to add to my collection.  To say that I'm stunned that this card has found it's way into my collection is a tremendous understatement.  The modest tally of Phillies baseball cards that I own from the team's earliest years now stands at two.  (And no, unlike last year, this is not an April Fool's Day post.)

It's beat up, to be sure, but as my Mom pointed out - the fact that it has so many pin holes in it only means that someone really appreciated this card.  I pondered many questions upon studying this card closer.  I wonder who owned this originally?  Who first pulled it from a pack of Old Judge cigarettes back in 1887 and how long afterwards was it pinned to a wall?  What has this little piece of cardboard seen in its lifetime before it ended up calling The Phillies Room its new home?  How many other Moms buy their sons baseball cards from 1887 and does she realize how grateful I am for everything she's ever done for me?

The Set
Issued by the Goodwin & Co. tobacco company beginning in 1887, these cards were inserted into packs of Old Judge or Gypsy Queen cigarettes.  The father of baseball card collecting, Jefferson Burdick, assigned the designation N172 to the vast number of cards available in this set.  (The "N" designates this as a 19th Century tobacco set per Burdick's The American Card Catalog.)  The Standard Catalog of Baseball Cards begins its summary of the set with this description:  "This is one of the most fascinating of all card sets, as the number of cards issued will probably never be finally determined."

The description goes on to say that some cards have up to 17 different pose and team variations, with cards available either with or without the date on the card or with handwritten or machine-typed names.  The online database at Beckett lists 577 different cards in the set, which is a low estimate given the number of variations out there for each player.  As I found out from The Phillies Database, currently being compiled by 14,000 Phillies, there are seven different variations available of the Sid Farrar card alone.

The Player
When the Philadelphia Quakers were formed in 1883, Farrar (not "Farrer" as displayed on the card) was the team's first baseman.  Born in 1859 in Paris Hill, Maine, Sidney Douglas Farrar was only 23 years old when he was tapped to join the new National League franchise.  He was the team's primary first baseman through the first seven years of its existence, playing 816 games at first.  Through the 2011 season, Farrar is currently third on the Phillies all-time list of games played at first base behind Fred Luderus (1,298 games from 1910 to 1920) and Ryan Howard (995 games).

In his seven years with the team, Farrar hit .253 with 17 home runs and 343 RBIs.  He left the Phillies in 1890 when the players' union formed the new Players League.  He manned first for the newly formed Philadelphia Athletics for only one season before the Players League folded.  The Phillies refused to take him back and Farrar retired from baseball at the age of 30.

After his baseball career, Farrar returned to New England and focused on cultivating the musical career of his daughter, Geraldine Farrar.  Geraldine would go on to become a world famous soprano opera singer, with a star on the Hollywood Walk of Fame.  Here's a link to her version of the Jewel Song from Gounod's Faust.  (That's right.  You're getting an extra helping of high culture this morning from The Phillies Room.)

According to the Baseball Reference Bullpen, Sid Farrar opened up a clothing store after his playing days and he was also the director of a local bank.  He passed away in 1935 at the age of 75.

The Cards
As mentioned previously, there are seven known variations of Farrar's N172 Old Judge baseball card.  I am now the proud owner of the "Right hand on belt buckle, 'Philadelphias' team name" variation, less a few pin holes.  I found this cool virtual gallery of Farrar's seven different Old Judge cards, which shows the nuances of the different variations.

The only thing I have yet to figure out is how exactly I'm going to display this card.  It's encased in a PSA graded slab, and I have no intention of removing it for fear that it might just disintegrate in my hands.  For now, it's displayed proudly on a shelf within The Phillies Room, safe in the knowledge that its current owner will not subject it to any more pins.
Posted by Jim at 7:00 AM

Email ThisBlogThis!Share to TwitterShare to FacebookShare to Pinterest
Labels: 1887, Farrar

That's awesome. Especially awesome that your mom tracked it down.

I'm waiting for my mom to do something similar. Heck, I'll be happy if she tracks down a 1979 Topps card for me.

Do you want my Mom to give your Mom a call?

You should tell your mom you decided to take up smoking as a result of her giving you a cigarette card. That'll teach her!

Just kidding of course--great gift from your mom. Usually what I get are my Scholastic Book Club baseball books from the 1970s and 1980s that she finds while cleaning out a closet. It's the thought that counts--but I'd love it if she thought about 19th century Phillies cards once in awhile.

That is awesome, and I'm now jealous that you have a 19th century baseball card. My oldest cards are some T206s and an American Caramel E90-1. One of these days, I'll finally get my hands on something pre-1900. I just don't know when.