One Sentence Summary:  Cole Hamels struggled in his latest spring start as the Phils fell to the Jays, 10-2.

What It Means:  I listened to most of this game on the radio, and the announcers were quick to point out that although Hamels surrendered eight hits in 3 1/3 innings, none of the hits were necessary a result of hard-hit balls.  So I'm going with a glass half full approach on this one.

What Went Wrong:  On the other hand, Jose Contreras was lit up in his spring debut, allowing four runs in 1/3 of an inning pitched.  The offense managed runs in the first and ninth and they were generally quiet throughout the bulk of the ballgame.

The red-hot Lou Montanez added three more hits to his spring tally, raising his average to .448.

Featured Cards:  Once again, the cards featured here have absolutely nothing to do with yesterday's game.  I'm still digesting my first packs of 2012 Topps Heritage, and I've enjoyed comparing and contrasting the set to the original - the 1963 Topps set.

So how did Topps do with matching up the 2012 Phillies with their counterparts on the original 1963 cards?  Based on my very scientific analysis - they did good.  As the chart below shows, the folks at Topps did a nice job of matching up the modern Phillies with their counterparts from yesteryear, with the exception of only a few cards.  It may be a stretch to say that Vance Worley matches up with Jim Brosnan, but I'm throwing the card into the "Hit" column.  I also considered the guys who switched teams during the offseason as "Hits," such as Jonathan Papelbon, Jim Thome and Ryan Madson.  Their 1963 counterparts are guys from their former teams.

The Jack Baldschun card featured here has a white slash running across the black and white mini-picture, which I believe could have been caused by a printing mishap.  Back in 1963, Topps attempted to correct the error by releasing a Baldschun card with black dots filling in the white slash and the "slash repair" variation was born.  With its 2012 Topps Heritage release, Madson's card pays homage to this variation by being available in three versions - the regular no slash version, the super short print white slash variation and the crazy super short print red slash variation.  For the record, had Madson stayed with the Phillies, I would have felt zero desire to pursue these variation cards for my Phillies collection.  I would have obtained the "normal" Madson card and stopped there.

Given the fact that the Diamondbacks, Mariners, Marlins and Blue Jays (along with a few other teams) didn't exist in 1963, it's only natural that players on these teams would have to replace players on the teams that did exist back in 1963.  And as far as I can tell, Topps stayed true to each card's color combination no matter which team was featured.  So nice job with this, Topps.  Even though the short-prints will keep me away from collecting the set, I can appreciate that at least some thought went into creating the set.

Well, except for this nonsense. 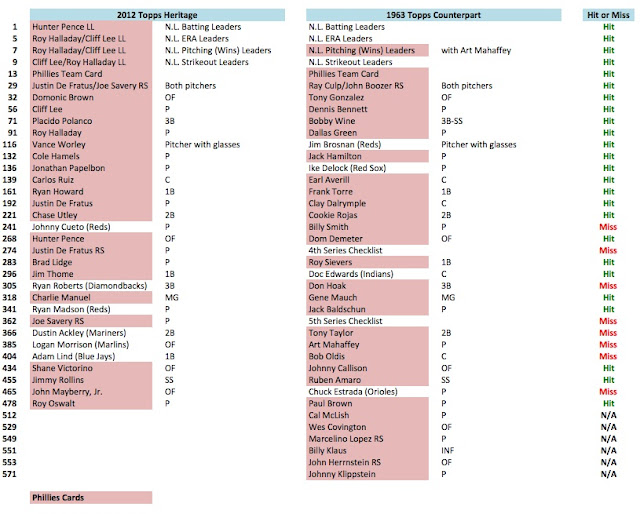 Wow. I didn't even realize that Topps had attempted to line up the card numbers between the two sets -- nicely done. Having said that, given the larger number of teams today vs. 1963, Topps could have at least made this year's set the same size (at a minimum) as the '63 original.

1. There were no short-prints,
2. No Rookie Stars shenanigans, and
3. 576 cards in the complete set, just like the original,

I would be prepared to call this the early favorite for baseball card set of the year.

I don't much like the fact that Topps has short-prints in their "base" Heritage set (better to short-print the hits and the specials), but I do understand it.

The fact is that before 1974, IIRC, Topps actually did print fewer cards of the final series each year because retailers didn't order as many boxes since it leaked into football season and kids moved on to buying football cards. But I don't think they printed 78% fewer of the last series, yet that's about what Topps prints of its Heritage SPs; IOW, SPs have about 22% the print run of the base cards. I would be fine with it if they did, say, twice or three times that amount, so maybe half or 2/3 of the quantity of SPs compared to the base cards. That would make it a bit less expensive to collect the whole set. I would love to have complete Heritage sets each year like I do Topps, and even better if I have to collect them pack by pack rather than buy a factory set. But you need perfect collation and 225 $3 packs to have any shot at getting all the SPs, so I never even try. Make that 1 SP per pack and I would make an effort. Instead, as a set collector, I buy on eBay and foresake the chance at "hits".

IMHO, the most efficient way to get a full Heritage set is to wait a few years and then try to look for a bargain on eBay that somehow slips through. If you don't mind paying $300, though, you can pick up a "master" set in the year it comes out. I say "master" in quotes, because a real master set would include all of the relics and autographs as well, and I've never ever seen one listed on eBay.