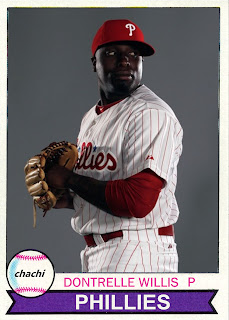 One Sentence Summary:  Cliff Lee surrendered two home runs and the Phillies bats were quiet (again) as the Bucs downed the Phils, 3-2.

What It Means:  We've reached that point in the spring where I start to worry a little.  Happens every year.

What Went Wrong:  The Phillies offense, still without Ryan Howard (for a while yet) and Chase Utley (for who knows how much longer) managed just two hits through the first six innings.

Featured Card:  The Phillies released left-handed reliever Dontrelle Willis yesterday.  I didn't see it coming, but in retrospect it's not really shocking.  Willis appeared in three spring games with the Phillies, allowing 9 of the 16 batters he faced to reach base.  His ERA after only 2 2/3 innings was 16.87, and he missed a week of action with arm fatigue.

This leaves me with a collecting dilemma.  One of my collecting quirks is that I collect cards of Phillies players for the years they play with the Phillies, whether or not they actually appear as Phillies on their cards.  (Got that?)  In Willis' case, his 2012 Topps card, featuring him with the Reds, was already reserved a space in my 2012 Phillies binder.  So what should I do?  My collecting logic dictates that this card should not appear within the binder, since Willis will not be a member of the 2012 Phillies.  But I've never actually  pulled a card from its spot before.  I shall have to ponder this further.

In any event, Willis becomes the first card in the returning Chachi Almost insert set, which pays tribute to those players who got close to becoming official Phillies during the year, but they didn't quite get there.

Lost in the news of Willis' release was the announcement that catcher Steven Lerud was reassigned to minor league camp.  Also, watching highlights of Thursday's game, I realized that Freddy Galvis has switched his uniform number from #71 to the more big-leagueish #13.
Posted by Jim at 8:00 AM

Maybe the Reds can have him back? He really pitched well last year, just didn't get any run support. I'm surprised the Phillies let him go, even with a poor outing this spring.

Can the Yankees sign him? They apparently need a washed up lefty.