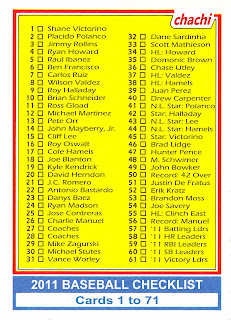 One Sentence Summary:  Vance Worley was pounded by the Twins, allowing five earned runs on eleven hits, as the Twins downed the Phillies, 11-7.

What It Means:  Worley got roughed up, but at least the offense looked lively, scoring seven runs on 15 hits.

What Went Wrong:  Other than the shellacking of Worley, not much else went wrong.  In total, Worley surrendered eleven runs, but only five were earned due to a costly error from second baseman Miguel Abreu.

Hector Luna had three more hits, including a home run, to raise his spring average to .286.

Featured Card:  There wasn't anything too remarkable about yesterday's game, so it seems as good a time as any to post a checklist.  I like checklists.  Checklists are an absolute necessity to a baseball card collector, and unlike a lot of collectors, I was never too bummed whenever I pulled a checklist from a pack of cards back in the day.  "Cool," I always thought.  "Now I know what I'm looking for."  Admittedly, with checklists available on-line nowadays, pulling a checklist from a pack of 2012 Topps Heritage is a bit of a downer.

The checklist featured here marks the end of yet another Chachi set.  (You'll have to take my word for it that cards numbered 62 through 71 are on the back.  Honest.)  The 2011 Chachi cards borrowed the design of the 1983 Topps set and the set, just like the Phillies season, ended prematurely.  For a look back at the season that was, here's a gallery of all 71 cards.

A week from today, I'll debut the first cards from the 2012 Chachi set, which will use the 1979 Topps design.  As explained here, the 1979 Topps set strikes up a sense of nostalgia for me.  I  already have cards created for most of the team, although as is the case every year, some players' photos are proving to be more elusive than others.  (I'm looking at you, Chad Qualls.)

The 2012 baseball season is almost upon us, and this is an exciting time for baseball fans.  No matter what the experts say, no one knows how the season will play out.  Every team has a glimmer of hope, no matter how faint.  Just like the 2012 Chachi checklist right now, the season is a blank slate.
Posted by Jim at 8:00 AM