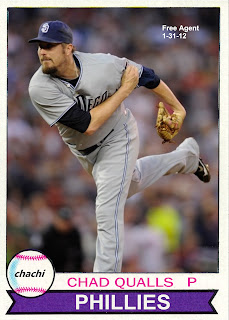 The Phillies signed reliever Chad Qualls to a one-year deal on Tuesday, as they continue to tinker with the make-up of their 2012 bullpen.  The team's official press release cites concerns about Jose Contreras' health as one of the main reasons the Phillies inked the righty Qualls to a contract.  In 77 games with the San Diego Padres in 2011, Qualls was 6-8 with a 3.51 ERA.  There's concern that his numbers were positively skewed due to his pitcher-friendly home ballpark, Petco Park.

In a completely irrelevant aside, Qualls is hoping to become the sixth man in history with a surname starting with the letter Q to play for the Phillies.  He'd join Tom Qualters, Paul Quantrill, Tom Quinlan, John Quinn and, one of my all-time favorites, Rafael Quirico.

Also, let the official uniform number records show that non-roster invitee Joel Pineiro was assigned the number 50 for less than two weeks before Qualls pulled rank and nabbed it from him.