I've collected baseball cards on a regular basis since 1979.  However, there are three specific years when I only collected baseball cards as a afterthought.  The latter two of these three years were 2002 and 2005 when there were quite a few major changes going on in my life and collecting baseball cards took a back seat.  The first year of those non-collecting years was 1996.  The summer of '96 was the first full summer I lived away from home as I opted to rent an apartment and stay in North Carolina after my spring semester wrapped up.  I clearly remember scrounging up the money needed ($20?) to buy a hand-collated 1996 Topps set that summer for the sole purpose of trying to combat an extreme bout of home-sickness.  Other than that purchase, I didn't add any 1996 Phillies baseball cards to my collection until a few years later.

The Set
Number of cards in the set:  I have nothing to base this on, other than my own personal recollections, but I imagine Topps scaled down their flagship brand to just 440 cards due to lack of interest on the part of baseball fans and baseball card collectors.  At this point, a lot of us were still trying to forgive the players and owners for the 1994 strike and collecting cards of current players wasn't a priority.  The set was released in two series (220 cards each) and for the first time since 1980, there was no traded set.

My very brief thoughts on the set:  I actually don't mind these cards, but I just wish there was more of them.  The set feels like an afterthought.  On the front of the cards, we get the player's name, a team logo and a close-up, smooshed version of the player's face.  It's as if the people at Topps got together in late 1995 and collectively decided, "Well we have to do something.  Let's go ahead and release this thing and see if anyone notices and maybe by 1997 things will have turned around."  (And then someone in the meeting added, "Besides, collectors are just going to go crazy over our new Topps Laser set.  It's a sure thing!")
Notable competition:  In my opinion, Fleer, Donruss and Score put out sets superior to the Topps set in 1996.  The Upper Deck set isn't one of my favorites (too much gold), but their Collector's Choice set from 1996 was very nicely done.  In a nod to the increasing number of premium shiny cards on the market, Topps released its first Chrome set in 1996.  At the time, I dismissed Topps Chrome as just being a shinier version of Topps Tiffany.
1996 Phillies
Record and finish:  The Phils sunk to a record of 67-95 on their way to a last place finish, 29 games behind the Braves.  This would be the final season for manager Jim Fregosi and his coaching staff as the team's brass decided to wipe the slate clean in 1997 with a new regime.  I recall first hearing the dreaded "re-building" word at some point in late 1995 or early 1996, and that re-building would go through several frustrating fits and starts before finally paying off beginning in 2007.
Key players:  Catcher Benito Santiago, signed to a one-year deal to bridge the gap between Darren Daulton and Mike Lieberthal, had a decent year, hitting .264 with 30 home runs and 85 RBIs.  Third baseman Todd Zeile, another short-timer, was having a solid year before his late August trade to the Orioles.  Zeile hit .268 in his 134 games with the club, with 20 home runs and 80 RBIs.  Jim Eisenreich had his season ended prematurely by injuries, but he still hit .361 in 113 games.  Curt Schilling led the pitching staff with just 9 wins, followed by Terry Mulholland's 8 wins.  Mulholland rejoined the Phillis in February before getting shipped to the Mariners in July for Desi Relaford.  Ricky Bottalico assumed the closer's duties, saving 34 games.
Key events:  The Phils stunk.  Other than hosting the All-Star Game in July, there wasn't a whole lot of good baseball being played in Philadelphia.  Injuries limited Lenny Dykstra to 40 games and Daulton to just 5 games.  Scott Rolen made his Major League debut on August 1st, and he'd soon become the face of the franchise, whether he liked it or not.
1996 Phillies in 1996 Topps
Cards needed for a complete team set:  There are only 18 Phillies cards within the 1996 Topps set, representing the lowest number of Phillies cards in a base Topps set since 1955.  Four of the 18 cards are multi-player Prospects cards, so if you remove those cards from the tally, the count goes down to a mere 14.
Who’s in:

#180 Gregg Jefferies (1b), #370 Mickey Morandini (2b), #44 Kevin Stocker (ss), #66 Jim Eisenreich (rf)
Regular catcher Santiago and third baseman Zeile are in the set, but they're featured with their former teams.  Left fielder Pete Incaviglia, who returned to the Phillies after a year in Japan, and center fielder Ricky Otero aren't in the set at all.
#128 Curt Schilling, #97 Mike Mimbs
Mulholland, Mike Williams and Mike Grace are completely omitted from the set.


#85 Darren Daulton, #161 Ricky Bottalico, #261 Lenny Dykstra
#255 Charlie Hayes (Pirates/Yankees), #385 Heathcliff Slocumb (Red Sox), #418 Tyler Green (injured)
#426 Kevin Jordan, #430 Rich Hunter, #431 David Coggin, #434 Scott Rolen
All but Coggin actually played with the Phillies at some point in 1996.  Coggin wouldn't make his Phillies debut until 2000.  Jordan's card also features Relaford, who appeared in 15 games with the Phillies after being acquired from Seattle.
There was a draft pick card featuring Taylor within the 1995 Topps Traded set, and he pops up again in the 1996 Topps set.
Who’s out:  The Phillies featured 54 players in 1996, with only 12 receiving Phillies cards within the Topps base set, for a woeful coverage percentage of 22%.
Phillies on other teams:  As mentioned previously, Santiago (#394 - Reds) and Zeile (#35 - Cubs) have cards in the set, as do Lee Tinsley (#359 - Red Sox), Glenn Dishman (#410 - Padres) and Relaford (#426 - Mariners).
What’s he doing here:  Why do we need two draft pick cards featuring Taylor in successive sets?  Scanning the list of other 1995 Phillies draft picks, they could have gone with a card for Marlon Anderson.  Then again, I'm still against the draft pick card concept in general.
Cards that never were candidates:  Given the small amount of Phillies cards in the Topps set, there are a lot of candidates.  Given the lackluster performance of the 1996 team however, there aren't a lot of good candidates.  Here are the Phillies cards I'd potentially add - Santiago, Zeile, Incaviglia, Otero, Mark Whiten, Lieberthal, Williams, Mulholland and Grace.  Relievers Ken Ryan (2.43 ERA and 8 saves in 62 games) and Toby Borland (4.07 ERA in 69 games) should also have cards.
Favorite Phillies card:  There aren't many cards from which to choose a favorite.  But for purposes of at least trying to pick a favorite, I'd go with either Daulton's or Dykstra's card for pure nostalgic reasons.  By 1996, the fan favorites on the 1993 National League Championship team were breaking down or moving on or both.  I've never dealt well with change, and the changes for me personally and for the Phillies over the next five years would be swift and at times painful.
Other Stuff
Recycled:  Topps went back to this design for last year's Vintage Chrome insert set, found within packs of 2011 Topps Chrome.  The recycled versions are fairly close replicas of the originals, other than the lack of embossed features found on the original cards.  Each of the original 1996 Topps Chrome base cards feature a background of small embossed circles, I'm guessing in an attempt to make the cards appear futuristic.
Blogs/Websites:  By the time this posts, a 1996 Topps-style card of Dick Allen may be up over at Dick Allen Hall of Fame.  I've been avidly following along as the blog posts Dick Allen cards for each year using the Topps design from 2012 and years earlier.  He's up to 1997 as of this writing.
Did You Know?:  My Dad and I attended the 1996 All-Star Game at the Vet.  Even though he had a natural aversion to heavy traffic and large crowds, he took one for the team by getting me to the game several hours before first pitch and staying to the bitter end of the game.  I remember it was actually kind of a boring game, with the N.L. All-Stars defeating the A.L. squad by a score of 6-0.  The Phillies sole representative was reliever Bottalico and he pitched a scoreless fifth, retiring Ivan Rodriguez, Cal Ripken, Jr. and Jay Buhner.

The stuff I remember best about that day had nothing to do with the game.  I remember that Kelsey Grammer sang the National Anthem and LL Cool J led the crowd in a pseudo-rap version of "Take Me Out to the Ballgame" during the seventh-inning stretch.  Hall of Famers Mike Schmidt, Richie Ashburn, Steve Carlton, Robin Roberts and Jim Bunning simultaneously threw out first pitches.  I remember that we booed Joe Carter at every possible opportunity.  And I remember a great night with my Dad.  Team President David Montgomery recently indicated that he'd like to see the Phillies get the All-Star game in 2026 as the country celebrates its Sestercentennial.  (Quarter-Millenial?)  If that's the case, I'll make every effort to be there with my sons. 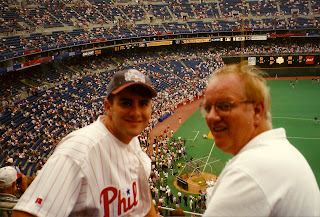 I don't mind this set design wise...but it is my opinion this is the worst Topps set ever put out. I hate the 440 cards. THere aren't even enough cards to get complete starting lineups, let alone my favorite cards, the back up catchers and mop up middle relievers. But as you said, these were probably a way for Topps to try to get through the post strike mess.

When I bought my hand-collated set, I thought the dealer had made a mistake. I couldn't believe the entire set fit into so small a box.