This post will get me up to speed, at least for the 1990s, in my analysis of Phillies players with very few or no Phillies baseball cards at all.  I'll continue this series of posts through at least 1999, and then I may go back in time and re-visit the forgotten Phillies, or at least the woefully unrepresented on cardboard Phillies, from the 1980s.

Here's a quick summary of those unfortunate few players with no Phillies baseball cards to their names:

43 different players appeared with the 1991 Phillies at some point during the season.

Rick Schu gets credit here using the Dickie Noles rule that I instituted with my review of the 1990 team.  Schu has no Phillies cards from his second stint with the Phils, but he appeared on plenty of cards during his initial term from 1984 to 1987.  Schu made it into 17 games with the 1991 Phillies, which would be his final big league action until appearing in one game with the 1996 Montreal Expos. 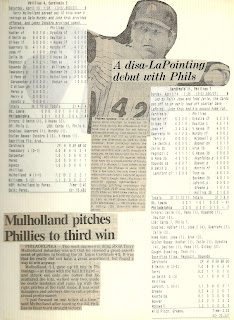 Lindsey makes an appearance on the 1993 list with the same two cards.

This was the end of the road for the 12-year veteran as LaPoint pitched horribly in his two starts with the Phillies (5 innings, 6 walks, 10 hits, 16.20 ERA), earning a quick release.  The Phils signed LaPoint on April 7th and he was with the organization for a little over two weeks before his release on April 23rd.  Given his very short time with the club, it's easy to see why he never made it onto a Phillies baseball card.

As a bonus feature with today's post, here's my scrapbook page from LaPoint's Phillies debut, which features the wonderful headline, "A disa-LaPointing debut with Phils."  And yes, I used to re-do the boxscores on my Commodore 128 for purposes of my scrapbook.  (Click to enlarge.)
Posted by Jim at 10:00 AM