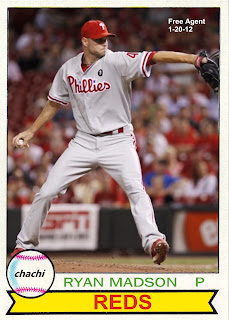 I'm tired of waiting for the official announcement that Ryan Madson is the newest member of the Cincinnati Reds, so I'm posting this card prematurely.  (Wednesday seems to be as good a day as any for a physical.)  Frankly, I think Madson's agent, Scott Boras, did his client a huge disservice by declining the Phillies offer of arbitration and holding out for a multi-year mega-contract.  Madson would have easily earned more with the Phillies in 2012 then he's set to reportedly earn with the Reds.

On a more personal note, I'm actually sad to see Madson leave the franchise.  He's home grown and he was one of the longest tenured members of the team.  He made his Phillies debut way back on September 27, 2003, when the Phils were still playing at The Vet.  He won a ring with the team in 2008, and he was a huge part of that championship season.  Despite who he chose as his agent, I hope Madson receives a warm welcome when his Reds visit Philly in August.

It was also great to see Tug and the Pope too.

The closing ceremonies at The Vet were simply phenomenal. I was there with my Dad, my wife and my sister. I remember getting chills at least five or six different times throughout the whole thing.

Was Tug McGraw's appearance a surprise to the fans?


I taped the show when it was on in 2003. Last night, Comcast (ex-CN8 channel) replayed it but I only caught the last 5 minutes of it, so I found my tape and watched the whole thing again!

It wasn't a surprise but it was still pretty moving since he was sick at the time.