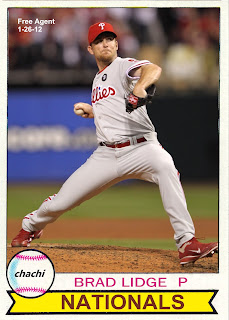 Former closer and all-around good guy Brad Lidge signed with the Washington Nationals on Thursday, ending any hope the reliever had of returning to the Phillies in a set-up role.  He signed a one-year, $1 million deal with the Nationals and he'll be reunited with his former teammate Jayson Werth.

The Nationals come to town for the first time in late May, and I'll be among the fans giving Lidge a warm welcome back to the Philly.