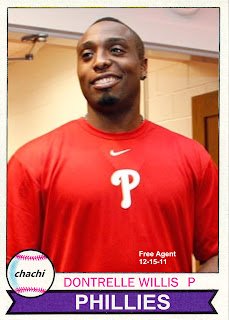 (14,000 Phillies compiled a similar list a few days ago.  Andy Van Slyke and Jeff Conine are good examples of position players I never thought I'd see in a Phillies uniform.)

The Phils signed Willis to a one-year deal yesterday, and he'll be used strictly as a left-handed specialist out of the bullpen.  He and Antonio Bastardo will share lefty bullpen duties with Willis also possibly serving as a potential long-man or spot starter.