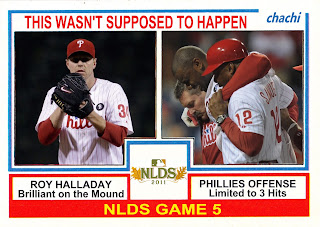 Why is this still in my draft folder?  Maybe if I make this public now, it will exorcise the demons of 2011 and cleanse the blog for 2012.  I need to put the past behind me and look forward to the start of a new season in a few short months.  And maybe if I sneak this one in on New Year's Eve, no one will notice.

One Sentence Summary:  Chris Carpenter outdueled Roy Halladay to stun the Phillies (and their fans) and send the Cardinals to the N.L.C.S.

What It Means:  In short, it means the season was a bust.  The 102 regular season wins were wonderful and enjoyable, but in the end the team fell short of its ultimate goal of winning a World Championship.

What Went Wrong:  The offense couldn't touch Carpenter.  Shane Victorino had a few hits and both Raul Ibanez and Chase Utley hit balls that died on the warning track.  The game ended with Ryan Howard grounding out weakly to second as his Achilles' tendon ruptured.  He had to be carried off the field as the Cardinals celebrated on the mound.

Halladay allowed a first inning run when Rafel Furcal tripled and Skip Schumaker doubled to start the game.  The ace locked it in after that, but the offense couldn't rally.

Featured Card:  What a drag it was to make this card.  I actually toyed with the idea of not having a Game 5 summary in the 2011 Chachi set just to aid an air of intrigue and mystery to the set.  At some point before Spring Training starts, I'll need to cap off the 2011 Chachi set with a checklist.
Posted by Jim at 10:00 AM

I think I would have left that one in draft mode.