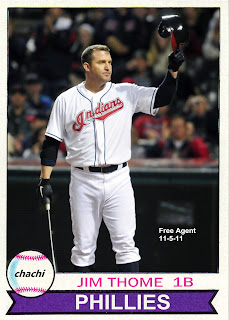 Jim Thome, who helped close out The Vet in 2003 and open up Citizens Bank Park in 2004, is returning to Philadelphia.  The slugger signed a one-year deal and he'll be back in red pinstripes in 2012.  He'll mostly be used as a big left-handed bat off the bench, although he may want to dig up his first base mitt as well.  Depending on the severity of Ryan Howard's ruptured Achilles' tendon, Thome could see some time at first.  All the articles I've read are quick to point out that Thome has played just 28 innings in the field since he left the Phillies following the 2005 season.  But playing first is just like riding a bike, right?