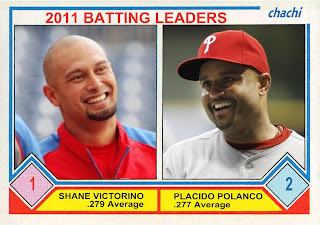 Based on a minimum of 502 plate appearances, only 5 Phillies qualified for the team batting average title this year:

However, if you change the qualifying mark to 3.1 plate appearances per team games played, seven players qualify and Carlos Ruiz takes the top spot for the team:

I went back and forth on this one, and I finally decided to go with the 502 plate appearance qualification for the Chachi team leader card.  Chooch had a great season, but I didn't think it was right to award him the team batting title when he had over 100 less plate appearances than Victorino.  (Victorino had 586 plate appearances to Chooch's 472.)

It's the third time Victorino has lead the team in batting average, but his .279 mark is the lowest to lead the team since Mike Schmidt hit .277 in 1985.  Quite simply, this team could be so much better if it had a legitimate .300 hitter.
Posted by Jim at 12:00 PM

Those are some pretty low averages atop the team.

I'm counting on Hunter Pence being featured on the 2012 Chachi Batting Leaders card, with an average north of .300.