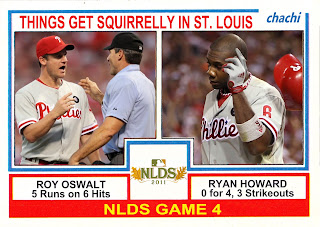 One Sentence Summary:  After an exciting first inning, the Phillies just couldn't get anything else going as the Cardinals got to Roy Oswalt and forced a Game 5.

What It Means:  It means tensions are high in The Phillies Room as the series is now tied 2-2.  The good news is that Roy Halladay will be on the mound tonight for the decisive Game 5.  The bad news is that the Phillies offense has been shut down by a less than suspect Cardinals pitching staff.

What Went Wrong:  I'm not going to dwell on this game, so I'll make this quick.  Oswalt (0-1) lasted six innings and allowed five runs on six hits.  The big blow was a two-run home run from David Freese in the sixth inning.  David Freakin' Freese.

For more on the Phillies short-comings during this game, please refer to the quick reference card prepared by Dick Allen Hall of Fame.

Featured Card:  To date, this is my least favorite card in the entire 2011 Chachi set.
Posted by Jim at 7:00 AM

Props to you for making the Chachi card of the loss look like, well, a loss.