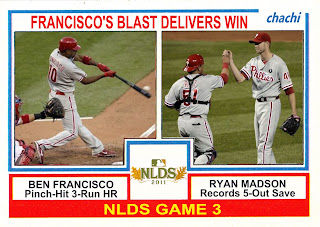 One Sentence Summary:  Ben Francisco's pinch-hit three-run home run in the seventh and gutsy pitching from Cole Hamels and Ryan Madson led to the Game 3 victory.

What It Means:  The Phillies are up two games to one with Roy Oswalt taking the mound tomorrow night. Also, and make no mistake about this, I did not enjoy watching this game as the entire three hours and thirteen minutes was way too tense for me.  I would prefer a nice little Phillies blow-out tomorrow.  I'd love to see the Phils score seven or eight runs in the first few innings while Oswalt is working on a shutout.

What Went Right:  Hamels (1-0) ran a lot of deep counts and he had runners on in every inning, but he managed to shut out the Cardinals through six innings.  He struck out eight while walking three and allowing five hits.

The offense was sputtering along until the seventh when Shane Victorino singled to start the inning.  A passed ball moved Victorino to second, but Cardinals starter Jaime Garcia retired the next two batters.  Manager Tony LaRussa opted to intentionally walk Carlos Ruiz and have Garcia go after pinch-hitter Francisco.  Francisco slammed a 1-0 fastball into the Phillies bullpen in left to break the scoreless tie and give the Phils a 3-0 lead.

In the eighth, with the bases loaded and one out, Madson was called upon to preserve the Phillies 3-1 lead and record a five-out save.  He induced an inning-ending double play and then survived an anxiety-filled ninth inning to secure the victory.

Featured Card:  I knew Francisco had to be featured on one of the panels.  His dramatic home run brought to mind the blast from Matt Stairs in Game 4 of the 2008 NLCS.  As much as I wanted to feature Hamels, I thought Madson's performance earned him a spot on the card as well.

Francisco opened the season as the team's regular right fielder, but a very slow start forced him back to the bench.  Phillies radio play-by-play announcer Scott Franzke has often referred to him as the "forgotten Phillie."  So it was great to see him come through and earn his place in Phillies lore.

Quote of the Game:  From Francisco, courtesy of MLB.com's Todd Zolecki - "When you get to the postseason you can change your season . . . That's what I tried to do."
Posted by Jim at 9:51 PM

hey there - noticed your a phillies fan and phillies card collector. have you seen my blog? 'all trade bait all the time' i just posted a phillies page. maybe you'll see something you like. stop by:

Thanks - I'll definitely check it out.