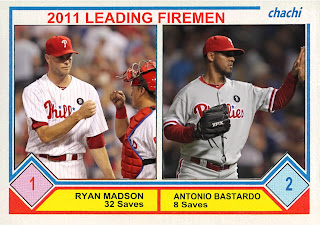 A few weeks ago, General Manager Ruben Amaro, Jr. made it clear that if the Phillies could not re-sign free agent-to-be Ryan Madson, he would search outside the organization for the team's 2012 closer.  It was essentially a vote of no confidence for closer-in-waiting Antonio Bastardo.  It was also a statement with regards to the severity of Jose Contreras' elbow injury.  Contreras enters 2012 in the final year of his contract.  He had surgery in early September to repair a tendon in his pitching elbow, and his recovery time is expected to be four to six months.

There were five pitchers who saved games for the Phillies in 2011:

The club holds an option on Lidge's contract for the 2012 season, and it's very much expected that they'll decline it.  If they decide to pick it up, the Phillies will be on the hook for Lidge's 2012 salary of $12.5 million.
Posted by Jim at 12:00 PM