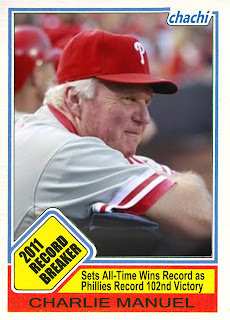 What It Means:  The Phillies played a part in one of the wildest days of regular season baseball ever by winning in extras and knocking the Braves out of postseason consideration.  In a amazing whirlwind of late night baseball, the Cardinals won in Houston and the Braves lost to give the Cardinals the National League Wild Card and a trip to Philly.  The Phillies will face off against St. Louis in N.L.D.S. Game 1 on Saturday.

The American League was just as wild as the Orioles stunned the Red Sox with a ninth-inning walk-off win, minutes before the Rays defeated the Yankees in twelve on Evan Longoria's walk-off home run.

The club's 102nd win surpassed the 101-win marks set in 1976 and 1977.  It was also Charlie Manuel's 646th regular season victory as the Phillies manager, moving him past Gene Mauch for the top spot on the Phillies all-time list.

What Went Right:  Chase Utley's bases loaded sacrifice fly scored Placido Polanco with the tying run in the ninth inning.  Hunter Pence's bloop single in the 13th scored Brian Schneider and David Herndon secured his first career save with a scoreless bottom half of the inning.  Justin De Fratus, who had pitched the 12th, earned his first big league win.

Featured Card:  I felt a Chachi Record Breaker card was appropriate given the historic win.
Posted by Jim at 1:30 PM

Great job by the Phillies keeping their players in until the end. Go Phils!

All the contributions by the bench & bullpen, and Dom Brown was relegated to 1 at-bat, striking out in the 13th.

How many at-bats has he had this month? I haven't been follow, but it's obvious he's the 40th man on this roster.

S36 - Just commented on your blog post. I knew there was a reason I didn't like the Yankees.

Jim - Dom Brown hadn't faced Big League pitching since July 29th. I'm getting ahead of myself, but I wouldn't be shocked if he gets traded for relief pitching this winter and we went with Mayberry in left in '12.

Jim, thanks for the support!

It took you until now to find a reason to hate the Yankees?