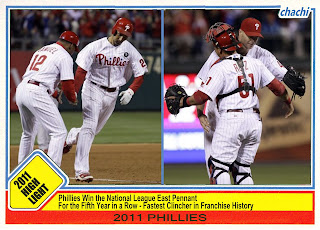 One Sentence Summary:  The Philadelphia Phillies are the 2011 National League East Champions.

What It Means:  With twelve games remaining, the Phils wrapped up the division.  They're now 98-52 and the magic number for clinching the best record in the National League is now two over the Brewers.

Jimmy Rollins and Shane Victorino paced the offense as Rollins enjoyed a four-hit night and Victorino drove in three runs, including a solo home run in the sixth.  Raul Ibanez put the game away with a grand slam in the eighth that capped a six-run inning.

It wasn't a save situation, but closer Ryan Madson came on in the ninth to wrap it up.  Rafael Furcal hit a high hopper to Chase Utley, Utley bare-handed the ball and fired it to Ryan Howard for the final out.  And with that, this team is one step closer to their ultimate goal for 2011 - winning it all.

Featured Card:  For the fifth consecutive year, I had the pleasure of creating a "Phillies Clinch East" highlight card for my Chachi set.

Similar to last year, both my boys slept soundly as I watched the Phillies spray champagne throughout the clubhouse.  My oldest son, Doug, turns five in December and there has yet to be a baseball postseason in his lifetime without the Phillies in it.  On the other end of the spectrum, this marks the first year the Phillies clinched the division and I didn't immediately call my Dad.  He's hanging in there, but the last few months have been extremely tough on his health.  He's going to bed fairly early these days, but I'll be sure to tell him all about the game later today.