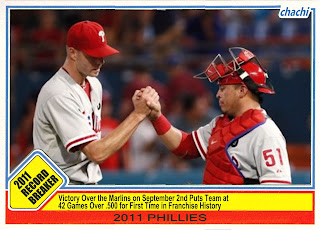 One Sentence Summary:  The Phillies won in Miami, putting them at 42 games above .500 for the first time in franchise history.

What It Means:  The Phils are cruising now, and I just hope they keep it up through October.  They've won five in a row and their record is 88-46.  The Braves lost on Friday night, so the lead in the East increased to 8 1/2 games.

What Went Right:  John Mayberry, Jr. drove in three runs, including a two-run home run in the fifth.  The Phils scored first when Shane Victorino led off the game with a triple and came home on Placido Polanco's sacrifice fly.

Starter Roy Oswalt (7-8) lasted into the seventh inning, allowing three runs on eight hits while striking out seven.  Ryan Madson recorded his 27th save after yet another scoreless inning of relief from Antonio Bastardo.

Featured Card:  I thought the new franchise mark for games above .500 deserved its own Chachi Record Breaker card.

Transactions:  The Drew Carpenter era ended when the righty was claimed off waivers by the San Diego Padres.  Carpenter appeared in just 11 games for the Phillies over the past four seasons.  He had a 1-1 record with an ERA of 8.53.

Kyle Kendrick was placed on the paternity leave list and Michael Schwimer was recalled from Lehigh Valley.
Posted by Jim at 9:48 PM