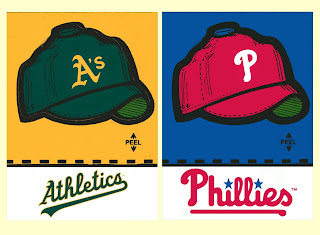 First Game:  I believe I've read where the old Philadelphia Athletics would occasionally scrimmage against the Phillies in exhibition games, but maybe I've made that up in my head.

The first time these two teams officially squared off was back on June 6, 2003, when the A's defeated the Phils, 7-4.  Brett Myers was roughed up for five runs in four innings for the loss.  Jimmy Rollins had three hits for the Phils and Placido Polanco hit a solo home run in the ninth.  Overall, the Phillies are 4-5 against the A's.

At the Ballpark:  There's a pre-game Sound of Philadelphia concert scheduled tonight.  On Sunday, former Philadelphia Athletic (and Phillie) Bobby Shantz will throw out the first pitch and all kids will receive a Four Aces beach towel.