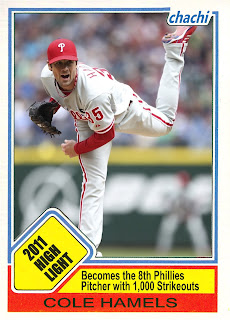 One Sentence Summary:  The Phillies managed just three singles off Jason Vargas, falling to the Mariners, 2-0.

What It Means:  The Phillies dropped the series and their record fell to 45-28.  They'll take a five-game lead over the Braves into the off day tomorrow before opening a series against the Cardinals in St. Louis on Tuesday.

What Went Wrong:  It was just a poor offensive performance all around.  Vargas (5-4), struck out six in his complete game shutout, allowing two hits to Ryan Howard and one hit to Ben Francisco.  The Mariners scored both of their two runs on bloop hits to left.  Cole Hamels (9-3) was the hard-luck loser, the victim of low run support from the offense yet again.

Featured Card:  Hamels struck out Miguel Olivo in the fourth inning for his 1,000th career strikeout, joining an impressive list of former Phillies in the 1,000-strikeout club.  (Although he's got a little ways to go before he catches up to Lefty.)  Here's the list of pitchers with 1,000 or more strikeouts in the franchise's history: