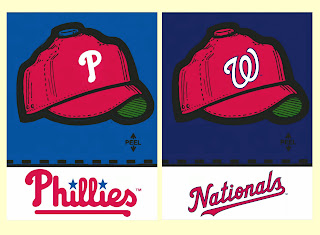 First Game: On April 17, 1969, Montreal Expos pitcher Bill Stoneman pitched a no-hitter against the Phillies at Connie Mack Stadium. Stoneman walked five and struck out eight during his gem. Jerry Johnson took the loss for the Phillies as both Rusty Staub and Coco Laboy had four hits apiece for the Expos. There were just 6,496 paying fans in attendance that day to watch Bob Skinner’s Phillies team get embarrassed by Gene Mauch’s expansion team.

At the Ballpark:  It's the Nationals' 2011 home opener today.  Other than that, I'm a little shocked the team has absolutely no promotions scheduled during the Phillies three-game visit.  Werth's contract must have absorbed a lot of the stadium give-away and fan promotion budget.