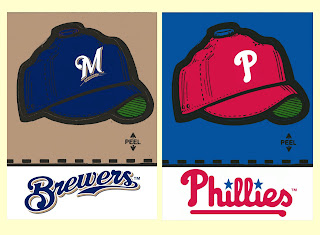 First Game: The Brewers' final year in the American League was in 1997, which was also the first year of Interleague Play. The Phillies and Brewers didn't meet up in 1997, but the Brew Crew switched over to the National League for the 1998 campaign. The teams met for the first time on July 3, 1998 at Veterans Stadium, with the Phils winning, 2-0. Curt Schilling, Wayne Gomes, Yorkis Perez and closer Mark Leiter (!) combined for the six-hit shutout against the Brewers. Both Phillies runs came in the second when Doug Glanville's two-run single brought home Bobby Abreu and Mark Lewis.

At the Ballpark:  Tonight is the first Hatfield Phillies Franks Dollar Dog Night of the year.

Bonus Flashback Sticker:  Since the debut of my custom Fleer stickers in my series preview posts, I've been exchanging e-mails with Jon (aka Fleer Fan), of the fabulous The Fleer Sticker Project.  In one of his e-mails, amongst the mutual appreciation for our extensive Beatles bootlegs collections, Jon asked if I took requests for custom Fleer hat stickers.  Presented here is one of his requests - the 1969 Seattle Pilots' hat from their one and only year as a Major League team.  Following the 1969 season, Bud Selig bought the team and moved the franchise to Milwaukee.

Jim - Excellent job on the Pilots sticker! Very nice work on the "scrambled eggs" on the brim! Thanks for taking on my custom request - it turned out great!