One Sentence Summary:  Roy Halladay dominated the Padres on Easter Sunday, as the Phillies completed the four-game sweep of the Padres.

What It Means:  This was the first time the Phils had swept the Padres in four games since 1979, and it was the team's fifth straight win overall.  The Marlins also won, so the Phillies, now 15-6, are still a game and a half ahead of the Fish.

What Went Right:  Halladay tied a career mark with 14 strikeouts in his 8 2/3 innings of work, allowing just five hits and one walk.  With a run across and runners on first and second with two outs in the ninth, Halladay yielded to Antonio Bastardo who recorded a one-pitch save.  The offense was adequate enough to secure the win for Halladay, although the team went 2 for 10 with runners in scoring position.  Shane Victorino provided the only real offensive excitement with an inside-the-park home run in the seventh.

Featured Card:  This is yet another insert from the 2011 Topps Heritage set, although I'm not exactly certain what a New Age Performer is. 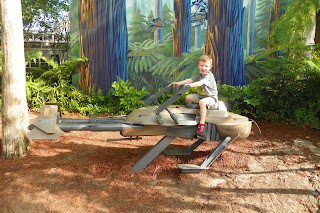 Transactions:  Following the game, the Phillies announced that Jose Contreras was flying to Philadelphia for an MRI on his right arm.  He was placed on the disabled list and righty Mike Stutes was recalled to take his place on the roster.

Disney Report:  We spent the day at Disney's Hollywood Studios, and I signed up my four-year-old son, Doug, for the Jedi Training Academy.  At approximately 10:15 on Easter Sunday morning, I watched my son defeat Darth Vader in a light-saber battle.  He then happily sped off on his speeder bike.  After that moment, the rest of the trip was just icing.
Posted by Jim at 2:00 PM

Email ThisBlogThis!Share to TwitterShare to FacebookShare to Pinterest
Labels: 2011, Halladay