One Sentence Summary:  Greg Dobbs punished his former team with a two-run pinch-single in the seventh, after Roy Oswalt's strained lower back forced his departure from the game and forced the entrance of a rusty bullpen.

What It Means:  If you want to beat the Phillies, sign one of their former players.  The Phillies fell to 9-4 and two of their four losses have featured key hits from former players - Dobbs tonight and Jayson Werth on Tuesday night.  The Phils maintain a one game lead over the Marlins in the N.L. East and they'll send Cole Hamels to the mound tomorrow night.

What Went Wrong:  Never mind the loss, Oswalt's back injury could be the biggest blow of the night.  He appeared to have injured himself running out a bunt fielder's choice in the bottom of the sixth.  He's suffered from back problems before, and he's been on the twice with the same ailment - once in 2006 and again in 2009.  Both occurrences landed him on the 15-day DL.

After Oswalt was forced from the game, the bullpen couldn't get the job done.  J.C. Romero and Danys Baez combined to record one out while allowing three hits, a walk and two runs. 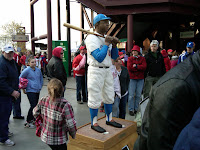 Featured Card:  On August 10, 2008, Dobbs' 21st pinch-hit of the 2008 season set the Phillies single season pinch-hit record, breaking the 95-year-old record set by Roy Miller in 1913.  This was back when I liked it when Dobbs got pinch-hits.

Field Report:  My record fell to 2-1 in games I've attended this year.  Jenna and I went with the chicken tenders and fries at the ballpark, mixing it up a little from the usual fare.  We also checked out the life-size Jackie Robinson statue on display in Ashburn Alley, carved completely out of wood (click to enlarge).  Both teams wore Robinson's #42 in honor of the baseball (and American) pioneer.
Posted by Jim at 10:41 PM