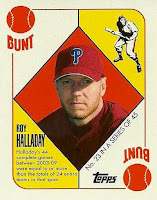 Another day, another cool card in the mail!  This time, reader Jeff sent along this 1951-style Roy Halladay baseball card, from the Red Backs insert set found in packs of 2010 Topps.  Jeff had astutely picked up within my post on 1951 Topps Phillies cards that I was still trying to track this card down.

In other news, the Phillies made the re-signing of lefty reliever J.C. Romero official today, and they invited seven additional non-roster players to Spring Training.  This brings the non-roster player count to 19, and their ranks include catcher Dane Sardinha, reliever Brian Bass, infielders Delwyn Young and Robb Quinlan.

Also invited, for the second year in a row, was catcher Tuffy Gosewisch.  I said it last year, and I'll say it again this year - how can you not root for a guy with a name like that?  That's a name that just belongs on a baseball card.
Posted by Jim at 9:44 PM

Email ThisBlogThis!Share to TwitterShare to FacebookShare to Pinterest
Labels: 1951, 2010, Halladay

Lordy, Jeff moves fast. Glad I didn't package up that card yet -- I was going to today but glad I didn't.

I was surprised too! Makes me want to start listing random cards from my wantlists within my posts . . .