The Phillies Room bids a fond farewell to Greg Dobbs, who signed a minor league deal with the Florida Marlins today.  Dobbs was a member of the 2008 World Championship team, and he was one of the premier pinch-hitters in the game in 2007 and 2008.  He led the majors in pinch-RBIs (18) in 2007 and he eclipsed Greg Gross' all-time single season Phillies pinch-hit record with 22 in 2008.  Injuries, a slumping bat, and a team of rarely rested regulars, cut his playing time significantly in 2009 and 2010. 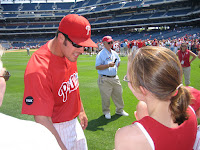 Dobbs is a favorite of my wife, Jenna, as his first daughter was born the week after our first son, Doug.  Not that he'd remember us, but we've met Greg on three different occasions - once at a pre-season luncheon and twice during the Phillies' photo days.  On all three occasions, Jenna asked him how his daughter was doing and he was kind enough to twice pose with Jenna and Doug.

Best of luck, Greg, except of course when the Fish are playing the Phils.
Posted by Jim at 9:25 PM

I will miss you, Greg. At least you are not a Met.