Ron Roenicke was recently named the new manager of the Milwaukee Brewers, replacing the outgoing Ken Macha.  Roenicke enjoyed a 8-year Major League career, mostly with the Dodgers, but he also played two seasons with the Phillies in 1986 and 1987.  Roenicke's first home run as a Phillie came back on June 2, 1986, when he hit a solo home run off the Dodgers' Jerry Reuss in the second inning in a game at the Vet.  This was probably Roenicke's most memorable game with the Phillies, as he went 4 for 5 in the game, scoring three times. 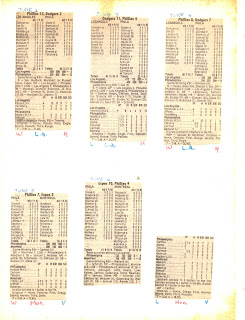 I featured the boxscore from that game here, along with Roenicke's 1986 Topps card that never was.  Roenicke was featured as a Phillie in Fleer's Update set in 1986, and I've always been a little disappointed he didn't make it into Topps' 1986 Traded series.  I created this card using the picture from the 1987 Tastykake Phillies team set.
In 165 games with the Phillies, Roenicke hit just .229 with six home runes and 46 RBIs.  He started 57 games in center field for the Phils in 1986, platooning at that position with Milt Thompson, following the May retirement of long-time center fielder Garry Maddox.  His playing time decreased significantly in 1987 and the Phillies released him in October.

Surprisingly, Roenicke is now the only ex-Phillies player managing in the Major Leagues as of this writing.

Ouch. Carlton got hammered on June 6 . Those last few years of Lefty's career were painful to watch.

Lefty started just 3 more games for the Phillies after his June 6th debacle. The totals from his last 4 games with the team - 0-2 with a 12.56 ERA over 14.1 innings. They had no choice but to release him.